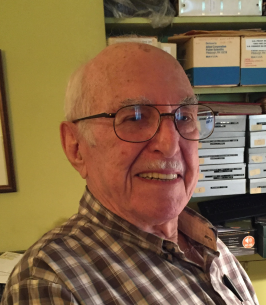 Martin K. Brown, 97, longtime resident of center city Philadelphia, retired principal of the Albert
M. Greenfield School, personal travel consultant, and community volunteer, died peacefully in
his sleep on July 11 at the home of his grandson and granddaughter in-law, Vincent and Ruthie
Vellucci, and his three great granddaughters, Lilliana, Elle and Lucie.
Treasured by countless alumni of the City Center School and the Greenfield School, he left a
lasting impact on many lives.
He was born in Philadelphia in 1925, the fourth of eight children. In 1927 his family moved to
New Jersey.
In 1942, he attended the University of Pennsylvania after graduating from
Haddon Heights High School. He was the first of his family to attend college. His studies were
interrupted when he was drafted into the army in 1943. He served as a medic with the US
Army, 91st Infantry Division in Italy through to the end of the war.
He was awarded two Bronze Stars—one for heroism and one for meritorious service.
After the war, he resumed his studies at the University of Pennsylvania, where he net his future
wife, Rita Giordano.
He received his BS in June, 1948 and his master’s degree in secondary education. Both he and
his wife joined the school district of Philadelphia as elementary and secondary teachers and
eventually completed certifications for principal.
In 1954, he was selected as principal for a new school in the 2000 block of Chestnut Street, The
City Center School. This new job also required him to head the Youth Study Center on the
Parkway, a school for troubled youth awaiting court actions. He held both those positions for
eight years.
In 1970, the Albert M. Greenfield School, named for the city realtor and philanthropist, was
opened and Mr. Brown became its first principal.
Originally planned for kindergarten through 6th grade, Mr. Brown pushed to include 7th and
8th grade, as center city has no junior high.
The school had a wide diversity of students: foreign-born, hearing impaired, gifted students
from all economic levels. In that same year, he moved from the suburbs to a house only a few
blocks from his school.
His wife had by then become principal of the Girard School she had attended as a child.
It was soon to grow into the Girard Academic Music Program (GAMP). Later, Mr. Brown served
as head of the Philadelphia Principals Association.

After serving the Greenfield School for 23 years, Mr. Brown retired in 1982 to become the head
of the Philadelphia School for two years.
Then he wanted more free time for his family, that now included a young grandson, Vincent,
and to pursue his love of travel.
He became a private travel consultant, a job he kept until he was 93. This enabled him to travel
all over the world with his wife and friends.
He took more than 40 trips abroad, the first of which was to Europe where he traced the trek
he had  from Salerno to Trieste during the war. He visited Italian families that he had met and
found the graves of lost comrades in American cemeteries scattered throughout Italy.
Mr. Brown also made time to volunteer in his community and mentor former students who
called on him for advice.
He served as the coordinator of volunteers for the winter shelter at Trinity Church for eleven
years, and he and his wife could be found each spring running the food booth at the Fitler
Square Fair.
He spent his free time making jewelry, filming movies with his grandson, and collecting
mementos and reading up on his favorite historical figure, Napoleon Bonaparte.

Martin K. Brown passed away on July 11, 2022.  Beloved husband of the late Rita (nee Giordano)  Loving father of Karen (Vittorio) Vellucci; Dearest grandfather of Vincent (Ruthie) and great grandfather of Lilliana, Elle, and Lucie.  Also survived by nieces and nephews.  Relatives and friends are invited to his viewing and funeral on SATURDAY from 10:00 to 11:00am at The PENNSYLVANIA BURIAL CO., INC. 1327-29 S. Broad St.  Entombment to follow viewing at Fernwood Cemetery.  In lieu of flowers donations can be made in his memory to  Winter Shelter, 2212 Spruce St., Phila., PA 19103

If you wish to donate to WinterShelter in his memory you can go to our website: www.trinityphiladelphia.org. The donate button is on the right side of the page, under the rotating photos. Drop down where it says "Give to" and WinterShelter is one of the options. Fill in your info, put Mr. Browns name in the memo section.

All rights reserved. This obituary is also archived at obittree.com